How to Delegate
The delegation process will be enhanced by the following key points:
•       Delegate the whole task when possible to increase motivation and a feeling of responsibility by the AHA
•       Avoid upward delegation which involves the AHA turning to the AHP for assistance with every problem that arises while the AHA performs the task that was delegated to them
•       Do not just delegate and leave the AHA to their own devices; have progress check points to ensure timely completion of the task and that work is progressing in the right direction
•       Only delegate if you know and understand the task; the AHP cannot expect the AHA to complete the task if the AHP does not know what to do themselves
•       Be careful with delegating tasks that contain sensitive issues 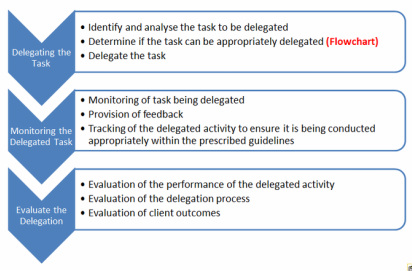 1. Delegating the Task
a)      Before you can delegate a task you need to identify and analyse the possible task to be delegated. Identification of the task often stems from patient needs established through the patient assessment and care-planning process; analysis of the task should not only be based on delegation parameters such as complexity, level of skill and knowledge, level of commitment, need for AHA involvement but also on the AHA’s scope of practice.
b)      Determine if the task can be appropriately delegated. The ‘Flow chart demonstrating the decision-making steps for delegation’ can assist AHPs on their decision making process

See tab ‘Delegation Flow Chart’ (‘When is it appropriate to delegate’)

c)       Delegating the task which includes communication between the AHP and AHA to discuss and clarify objectives and provide a clear picture of what needs to be achieved, including the purpose (why), the goal (what the task is), the boundaries of the task (how the task
should be carried out) and timeframe. Reward, recognition and learning skills can also be communicated.

It is important that the AHA feels responsibility towards the task and not just extra work that needs to be done. To promote personal initiative and a sense of contribution by the AHA, just the outlines of the task but not the method to accomplish it should be delegated. This will only work if the AHP shows confidence and appreciation in the work of the AHA, maintains open lines of communication, provide appropriate supervision and monitors the work delegated to provide feedback, and avoids micro-managing the work that has been delegated.

Bell at all (2010, p.9) also state three levels of delegation:
1.       Precise instruction provided for delegated activities with no freedom for the AHA
2.       Instructions provided in delegation, with some freedom for AHA to determine aspects of activity with set guidelines
3.       Activities delegated with freedom in increasing or decreasing difficulty within set guidelines

2.  Monitoring the Delegated Task
To monitor has been described as to‘observe and check the progress or quality of (something) over a period of time; keep under systematic review’ (Free Dictionary). Direct and indirect monitoring of delegated tasks assists the AHP to:
·        a. Assure the AHA is capable to undertake the delegated task
·        b. Establish that the delegated task is being completed as per the instructions that were discussed
·        c. Establish if the activity and/or the instructions require adjustment
·        d. Establish if further guidance needs to be provided to the AHA
·        e. Assure the activity is providing the desired results

Direct monitoring by an AHP of the execution of a clinical task by an AHA is often done in the form of supervision. Besides being able to  provide direct feedback to the AHA, supervision can allow the AHP to assess if the AHA is performing the task competently, safely and with the expected outcomes.

3. Evaluation
It is important that the AHP not only reviews the work done by the AHA to be able to identify any gaps in AHA performance, but also the delegation process itself (what worked well and what didn’t) as well as client outcome, all done in the agreed time interval with positive and
corrective feedback.
Powered by